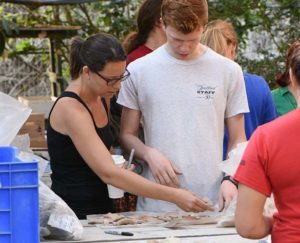 I am an archaeologist specializing in ancient numismatics, mythological imagery, and religion in the Roman provinces. I’m broadly interested in the material dimensions of the stories that communities and peoples tell about themselves, their past, and their connections to other groups. Most of my research considers these themes via civic coinage in the Eastern Mediterranean. My current projects include work on numismatic imagery in Roman colonies, aspects of local coinage in Arabia, piggybanks, and depictions of Aeneas and Dido in Roman art.

I have excavated across the Roman world, from England to Israel. In summer 2019 I began collaborating with the Balkan Heritage Field School and the Museum and Gallery of Podgorica on excavations at the Roman city of Doclea (Montenegro). Learn more here! I also co-direct WIRE: Women in the Roman East, an online tool for exploring the lived experiences of women in the Roman Near East.

Originally from the suburbs of Los Angeles, I continue to use “the” before the numbers of freeways and refuse to fully accept temperatures lower than 50 degrees in January.